Read more about the EAZA21+ Campaign

The information represented in the EAZA Conservation Map is based on information provided by EAZA Members in the EAZA Conservation Database and believed to be reliable. EAZA makes a diligent effort to provide a complete and accurate representation of the data in reports, publications, and services. However, EAZA does not guarantee the accuracy, adequacy, or completeness of any information. EAZA disclaims all liability for errors or omissions that may exist and shall not be liable for any incidental, consequential, or other damages (whether resulting from negligence or otherwise) including, without limitation, exemplary damages or lost profits arising out of or in connection with the use of this information. No part of information gathered from the EAZA Conservation Map may be reproduced for use in hard copy, machine-readable or other forms without advance written permission from EAZA and the EAZA Members from which the information originates.

The turquoise dwarf gecko Lygodactylus williamsi is an example of species that used to be affected by very high demand in pet trade. In the mid-2000’s, it also boomed in Europe, which is when the EAZA Member Erfurt Zoo (Germany) started focusing on the protection of this charming reptile.

The turquoise dwarf gecko is endemic to Tanzania and lives exclusively on the screwpine tree Pandanus rabaiensis in the tropical Forest Reserves of Kimboza and Ruvu. Forest fragmentation, the expansion of the invasive tree species Cedrela odorata and serious exploitation for international pet market are jeopardizing the survival of species, listed as Critically Endangered in the IUCN Red List.

Due to the small remaining main habitat of about 4 km² at Kimboza Forest, it soon became clear to Erfurt Zoo that the focus had to be on habitat conservation and restoration. In 2020 Erfurt Zoo launched the “Kimboza Forest Gecko Project” together with the Sokoine University at Morogoro (Tanzania) as the in situ coordinator, whilst the German Zoological Society for the Conservation of Species and Populations (ZGAP) collects donations from zoos, museums and botanical gardens and managing the administrative duties, and the Vivaristische Vereinigung e. V. provides the main contact to private gecko breeders in Germany.

The project has two main aims for the present time:

The project will be enlarged in the near future. Ecotourism is foreseen to be brought in, and the creation of a tree nursery for native plants (including 13 endemic tree species) is planned. Locals will be the first ones profiting from this conservation project, as well as the turquoise dwarf gecko and whole Kimboza Forest!

Finally, Erfurt Zoo has launched a conservation donation campaign to fund the Kimboza Forest Gecko Project. If you want to receive more information, you can write to Dr. Heike Maisch: heike.maisch@erfurt.de

And what about the pet market? Fortunately, the threat has been reduced. Unlicensed collection of the species had been strictly prohibited in Tanzania since 2002. Nowadays, the turquoise dwarf gecko is also listed in the CITES Appendix I and the EU has banned its imports. The last seizure by customs in Europe took place in 2015 at Heathrow Airport (UK). Many other species need a stronger protection against illegal, unsustainable and/or unethical trade: we hopethat the turquoise dwarf gecko case can inspire other positive actions!

To read more about the project, visit the EAZA Conservation Database.

Find here the latest achievements of the projects highlighted in 2021 for the Conservation Database Snapshots. For a better view, click on the image. For more information about our Members' conservation work, visit our Conservation map. 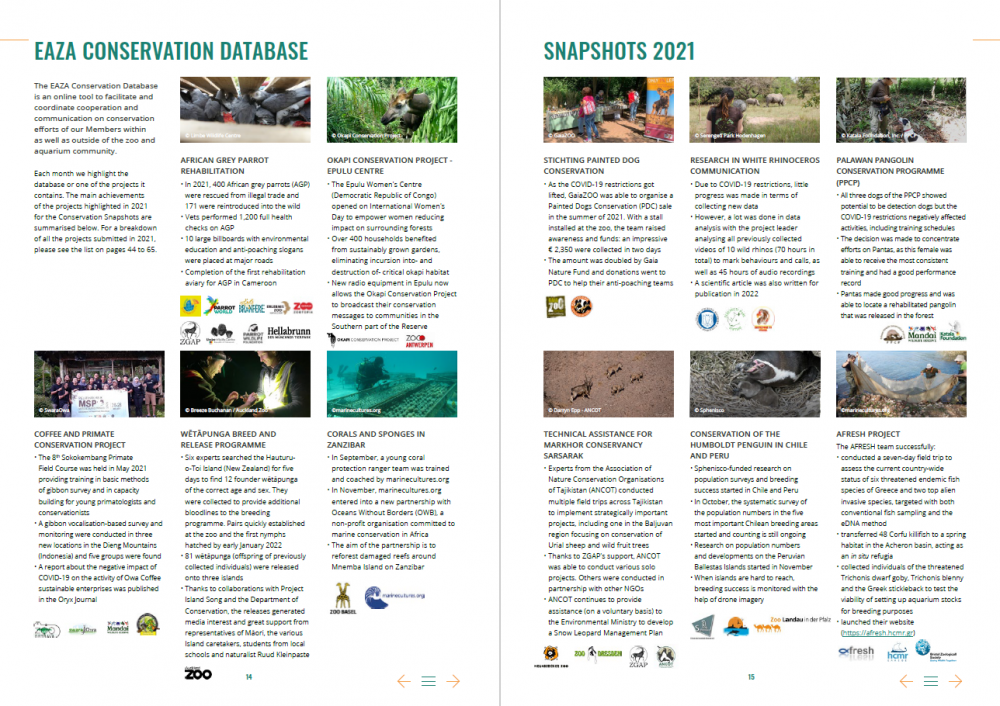